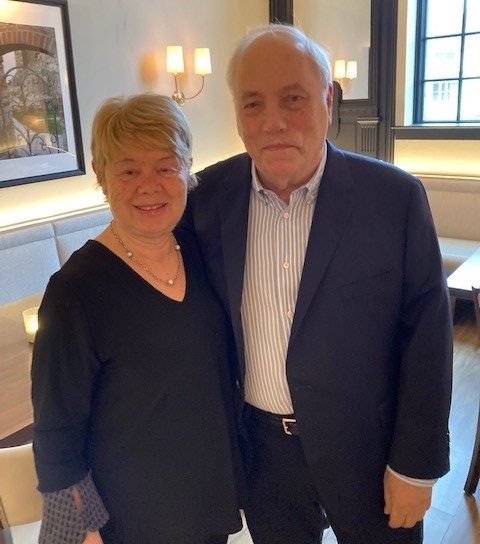 Power of Prevention: Rubenstein Family Invests in Education and Action

Richard and Lea Rubenstein, like so many people, are deeply concerned about the state of current affairs, and are especially heartbroken about Russia’s recent invasion of the Ukraine. In addition to giving to relief efforts for global organizations, the Rubenstein Family is investing in a positive vision for the future by establishing The Rubenstein Family Holocaust Education Fund for Loomis Chaffee School through the Jewish Community Foundation.

“Students need to understand why human atrocities happen and how to help prevent them from ever happening again,” says Richard, a Loomis Chafee alumnus. “Taking action through prevention is easier than fixing it afterwards. The best way we can do this is through education and other types of intervention.”

“This is Richard’s passion and I’m fully in favor of it,” says Lea, who lived under Communism for 20 years in the former Czechoslovakia (now the Czech Republic and Slovakia) before coming to the United States in 1966.

The Rubenstein Family Holocaust Education Fund supports the prevention of future genocides through Holocaust education. Combined with other funds at Loomis Chaffee, the Fund will finance high-profile speakers, school-wide convocations and classes.

“Regrettably the Fund is more germane now with what’s going on in Ukraine because it’s designed not only for Holocaust education but for genocide education,” says Richard, who has visited the Former Soviet Union including the Ukraine seven times. “History is repeating itself in the worst way right now. I hope young people will help take care of these things that affect all of us because it’s their world and, more importantly, our grandchildren’s world.”

Richard’s dedication to Jewish service began in 1966, after his parents suggested he join a 10-week study mission run by the Joint Distribution Committee (JDC).  Richard witnessed first-hand Jewish rescue and relief operations in Europe, North Africa and Israel. Not only did Richard meet the love of his life, Lea, during his trip, he sparked a meaningful connection to Judaism and deepened his family’s charitable legacy.

Richard noted that, “the 1966 trip totally changed my life as I saw first-hand the horrors of the Holocaust and the revitalization of the Jewish People in Israel as well as the rest of the world.”

Richard and Lea’s endowed fund will no doubt empower the next generation to be a part of their vision for positive action and permanent change.

UncategorizedPower of Prevention: Rubenstein Family Invests in Education and Action